FlashTiming’s FT-FAT is an affordable fully automated timing system. The FT-FAT is radio controlled, so there’s no need to wire the starter or point a timing device at the starter’s pistol. It combines accurate, reliable starts with built-in communications between the starting and timing officials.
Here’s how it works: 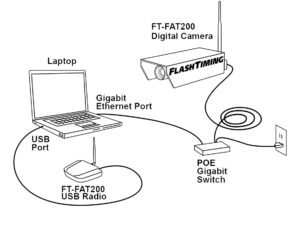 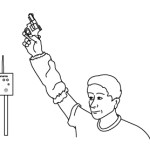 The third FT-FAT radio is located next to the starter and should be positioned within 2-4 feet of the raised starting pistol. For best results, there should be line of sight between the three radio units. 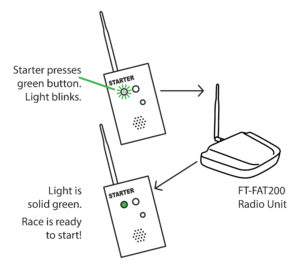 Once the starter receives the “I’m ready” signal, the race may start. The sound of the gun blast starts the race clock. There is no special starting gun or ammunition required to start the clock: a .22 caliber starting pistol is sufficient.

The race times are encoded on each frame of the video and these times are displayed on the live feed video on the laptop. The FlashTiming operator starts capturing the video to the hard drive when the first runner approaches the finish line. 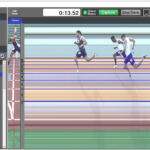 CAPTURE
The video camera records each runner as they cross the finish line. Each frame captured is encoded with the race time. The operator stops capturing when the last runner crosses the line and the captured video is stored on a laptop. Only the relevant video is captured and stored on the computer’s hard drive. 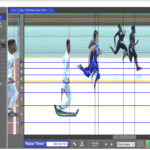 FlashTiming can be configured to exchange data with most popular meet management applications, including Hy-Tek’s Meet Manager, AthleticNet Run Meet, DirectAthletics’ MeetPro, RaceTab, MeetPro,  TrackMate, Easy Meet Manager and Apple Raceberry Jam. With this feature, FlashTiming displays the list of athletes in the event. The finish line judge clicks on the runner’s name or lane in the list and the time is recorded automatically. When all runners are recorded, the results can be transferred to your meet management application with a click of the button.